TOPEKA (KSNT)– A local woman is fighting to help others like her son after he succumbed to a rare genetic disorder. It’s a fight she is now taking on for the small number of kids just like him.

Kasen Smith will always be remembered as “the sweet boy” who could make himself laugh and others around him smile. That sweet boy changed his parents’ lives the day he came into the world.

“I think the best part about him was he showed us truly how to be thankful,” Amber Smith said of her son Kasen.

Smith is mom to Sadie, Kasen and Conor. Kasen was the middle child, and the only one diagnosed with a rare genetic disorder when he was young. It’s a disorder that kept him from living past the age of two.

“He passed away on July 25, 2018,” Smith recalled, tearfully remembering the last days she spent with her son. “I feel really thankful because we had seven days with him. We were able to shut off the monitors. We didn’t have to hear the constant beeping. They were able to keep him very comfortable. He took his last breaths in my arms.”

When Kasen was a baby, Smith and her husband noticed something wasn’t right. Kasen wouldn’t look at them. Smith described it as “he was looking through” them. He was also born with a clubfoot. His parents took him to numerous doctors who asked all kinds of questions and ran all kinds of tests on the baby. However, they weren’t getting the answers they were looking for.

They then were referred to a neurologist at Children’s Mercy in Kansas City who diagnosed Kasen with a rare genetic disorder: ubiquitin-like modifier activating enzyme 5, known more commonly as UBA5. Kasen also had dystonia which causes involuntary muscle contractions. Then, later down the road, seizures came along. These health issues played a part in their decision to provide end-of-life care. In Kasen’s final days, scans showed his brain started shrinking.

“We did the brain MRI and what they found was his brain had deteriorated to the point that the medicines that they were trying to use weren’t working,” Smith said.

While Kasen was still here, Smith worked to find answers as to what was happening with her son. They couldn’t sit back and watch their baby suffer in pain. So, she started doing research of her own to learn more about the genetic disorder. She even found out that she and her husband were both carriers of the UBA5 gene, which is how Kasen got it. While Smith was on a journey of discovering this rare health disorder, she felt like she needed to do more for her son.

“It was like this sucks but we’re going to do this and we’re going to figure out how to make sure everyone knows about UBA5, and that we can give these kids a chance,” she said.

As of 2022, the University of Massachusetts reports there are 30 known UBA5 cases in the world. At the time of Kasen’s diagnosis, there was only one other family in Kansas who had it. That’s how Kim Krauter and Smith formed a connection.

“We get a phone call from Dr. Coffman, our neurologist at Children’s Mercy,” Krauter said. “And he said, ‘OK guys, we have another family and they live an hour away from you. Can I give them your number?’ And I was like, absolutely!”

Krauter’s daughter Mady was diagnosed with UBA5 at a young age as well. Since Smith and Krauter didn’t have a community they could talk to about their kids going through this battle, they started their own. The UBA5 Foundation has been around for three years now. It’s meant to raise awareness and money to support research for the disorder.

For Smith, even though her son didn’t make it past age two, he’s still making an impact on people today thanks to his mom’s determination and fight.

The foundation is looking to raise $50,000 to start research for UBA5. If you’d like to help, you’ll get a chance soon. There will be a UBA5 walk at the Topeka Zoo on Aug. 20.

KSNT 27 News is honored to present a special segment called ‘Everything Woman’!

We will highlight women whose achievements and contributions might otherwise go unrecognized.  These special women go above and beyond, and do great things in the communities they serve.

If you know of a ‘Remarkable Woman’ you would like us to highlight, nominate them here.

Then, join us on KSNT 27 News @ 10P on the last Tuesday of every month, as we highlight a ‘Remarkable Woman’!

Thanks for signing up!

Watch for us in your inbox.

Wednesday’s lunch concert is the final one for 2022

Why two amendments are raising questions ahead of …

Amy Douglas Visits Fox 43 AM Live With Her Therapy …

Washburn Rural’s Cruz Perez is defying odds as a …

The brightest Jupiter will be for 107 years

Wednesday’s lunch concert is the final one for 2022

If not Tampa, Chiefs-Bucs will play in Minnesota

Tropics team revived, staying in Topeka after all

Inmates find new ways to get drugs into facilities

Tropics team revived, staying in Topeka after all 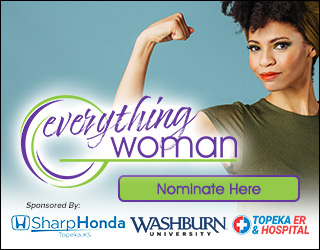